Few pieces of media commentary are more asinine than reporters dealing with share prices… I have collected many over the years. A worthy addition recently. “Here are today’s major movers. Contact Energy was unchanged, Meridian……..”

Posted by Eye2theLongRun at 6:03 PM No comments:

Having labelled food products to within an inch of their life to pacify the food worriers – and shoved the price up in process, I hear in my NW supermarket today, ads for “free” courses (read consumers pay) on how to interpret food labelling. MBIE would regard that as a regulatory win then?

Posted by Eye2theLongRun at 8:44 PM No comments:

Getting gray power into proportion–NZ is little different 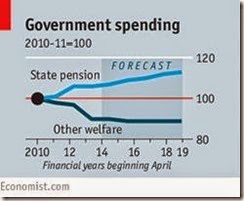 INVOKING the spirit of the Blitz, Britain’s Conservative-led government says that, when it comes to austerity, Britons are in it together. Yet the group born under the shadow of the country’s wartime trials is largely exempt. Since 2010 the basic state pension has risen by 16%—5% in real terms—under a formula that guarantees generous increases whatever the economic weather. Pensioners also enjoy free TV licences, free bus passes and a handout to help pay winter fuel bills. The government even subsidises their savings, by offering bonds yielding 4% interest—more than five times its own borrowing cost—exclusively to the over-65s. And if the Tories are returned to power at the general election in May, oldies can expect more of this largesse. On February 23rd David Cameron, the Tory prime minister, promised to protect their handouts on the basis that “these people have fought wars, seen us through recessions—made this the great country it is today” (see article).

That argument is economically senseless and morally indefensible. Over the past five years, the average British household has seen its income fall by about £500 as a result of coalition tax increases and spending cuts. The average two-pensioner household has taken a hit of just £23. Yet far from being the shivering, uncomplaining veterans of Tory spin, its members more typically came of age in the easy-living 1960s. Buoyed by generous pensions and decades of soaring house prices, the wealthiest fifth of pensioner households enjoy average incomes well over twice the British average: for such lucky wrinklies, the winter-fuel allowance is less an inducement to turn on the radiator than an invitation to chambre some decent wine. And as more British home-owners approach retirement, the numbers of rich pensioners will grow. The truth is Mr Cameron is motivated less by a desire to uphold the dignity of age than to bribe pensioners—the Britons most likely to vote Tory.

Contrast their treatment with that of younger Britons, whose taxes are paying for their pampered elders. Unlike state pensions, working-age handouts have been squeezed. Child benefit, previously a universal payment to parents, is now means-tested. The Tories have promised the young even more austerity, by making them work for unemployment benefits—which are already 21% less generous for the under-25s—and denying them housing benefit.

Transfers from young to old can be justified, both because many of the old cannot work and because technological progress means youngsters are likely to end up better off than their grandparents. Yet today’s low-skilled Britons, unlike their grandparents, have seen their incomes serially squeezed. At 14%, youth unemployment is high. And for those without property to inherit, exorbitant rents and house prices—the result of decades of failed planning—have dashed the dream of home-ownership to which Britons aspire.

Britain’s next government must redress this imbalance, not worsen it, as Mr Cameron proposes. It should scrap the free bus tickets and other pensioner bungs, which would save £3 billion. By means-testing the state pension, it should bump up payments to poor pensioners and gradually withdraw them from the richest ones. Many oldies would feel aggrieved; the universal state pension has long been seen as a cornerstone of the welfare state. Yet money is short, and the scale of today’s redistribution from the poor to the rich is hard to defend. Moreover, reforming the pension could help preserve a more cherished cornerstone. Cutting the state pension bill by a fifth would save about £15 billion. That is about half the extra cash the National Health Service will soon require—if it is to meet the steeply rising

Posted by Eye2theLongRun at 2:39 PM No comments: