Every dollar lost from agriculture through such processes involves, on average, a further $1.99 in outputs from contributing industries being displaced into less valuable uses…. and 2.46 FTE jobs.

This is a high price to pay for an ephemeral “feel good”  notion based on xenophobia. And that's not even counting the benefits lost.

Posted by Eye2theLongRun at 9:16 AM No comments:

As Bernanke gets ready for another round of “stimulus” in a vain attempt to push recovery in the U.S. it is worth recalling these absolute basics:

Nowhere that I am aware has he identified what the current “unproductive uses” are let alone the “more productive” uses.

Posted by Eye2theLongRun at 11:05 AM No comments:

Who is punching above their weight ??? 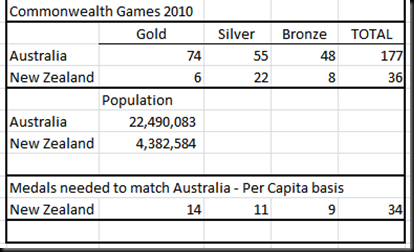 Posted by Eye2theLongRun at 4:37 PM No comments:

Economic misconceptions abound – not least in the media. The extent to which people are “out” in their notions is not often tested however. Here  marginal revolution brings us some stats about US students. I find it difficult to think why they would not apply – at least in order of magnitude in NZ… especially to journalists:

“Students typically come to an economics class with many misconceptions, not just random errors but systematic biases (see especially Caplan 2002).

When asked about profits as a percentage of sales the median student guessed 30% (actual rate, closer to 4%).

When asked about the inflation rate over the last year (survey was in 2009) the median student guessed 11%.  Actual rate: much closer to 0%.  Note, how important such misconceptions could be to policy.

Posted by Eye2theLongRun at 4:22 PM No comments:

Is this so hard to get our heads around? Here is the lesson:

Washington - Fears of a full-blown currency war flared as the US dollar fell to an eight-month low against the euro and the US stepped up pressure on China to let its currency rise. (NZ Herald)

Beijing – Anticipation of a full-blown currency war  grew as the euro rose to an eight-month high against the US dollar and China stepped up pressure on the US to let its currency fall.  (Brent Wheeler Herald)

Currencies are best thought of NOT as investments but as positions – the key being that it is completely and utterly impossible… nor will all the journalists and politicians in the world ever make it any different… for a currency rate to mean anything except relative to another currency.

So various people who ought to know a very great deal better, should stop, cease, and desist permanently from using phrases such as  “saving the export sector”… unless they are happy to declare their desire to destroy the import sector. And if they want stable prices and cheap consumer goods to “stimulate” the economy they should be happy to declare their agreement to destroy a few exports.

And those who use the term “currency wars” should really just read war comics… Whitcouls have them in bound editions for the “big reader”.

I know exciting and important stuff like TV presenters and foreshores and spiritual gynaecology and  really interesting stuff is a distraction but…..  do try to keep up please.

Posted by Eye2theLongRun at 11:32 PM No comments:

Losing at forex…. not a record but a creditable effort by RBNZ

The world record for losses as a foreign exchange trader despite owning the printing press still belongs with the Bank of England after its little tussle with George Soros – an effort which could only be described as a FAIL.

This effort was a major – but one of so many over such a long time you really have to conclude that central banks just don’t have the learning gene – not there, sorry, absent, not functioning.

And thus we get this bit of pith from the RB chief in N.Z…..

“the Bank has maintained stable underlying income from interest earnings and stable operating costs. “Nonetheless, we have recorded a loss of $111 million for the year ended 30 June 2010, as a result of unrealised losses arising from adverse revaluations on our assets and liabilities.

Dr Bollard said most of these losses occurred on the Bank’s unhedged foreign exchange position, as exchange rate and interest rate movements partially reversed the large unrealised gains of the previous year. “

The “trading” was supposed to take the “extreme highs and lows” off the dollar assist our economic  wealth. This is a puzzling objective – even if it could be achieved….

While wondering why this needs to happen – the idea of “stable underlying income from interest earnings” is also worth a thought. What exactly is this and why is the currency monopolist helping itself here as well?

Posted by Eye2theLongRun at 10:27 PM No comments:

Cause, Affect, Effect and Correlation

Posted by Eye2theLongRun at 1:45 PM No comments:

NEWCASTLE, South Africa — The sheriff arrived at the factory here to shut it down, part of a national enforcement drive against clothing manufacturers who violate the minimum wage. But women working on the factory floor — the supposed beneficiaries of the crackdown — clambered atop cutting tables and ironing boards to raise anguished cries against it.

“Why? Why?” shouted Nokuthula Masango, 25, after the authorities carted away bolts of gaily colored fabric.

She made just $36 a week, $21 less than the minimum wage, but needed the meager pay to help support a large extended family that includes her five unemployed siblings and their children.

The women’s spontaneous protest is just one sign of how acute South Africa’s long-running unemployment crisis has become. With their own industry in ruinous decline, the victim of low-wage competition from China, and too few unskilled jobs being created in South Africa, the women feared being out of work more than getting stuck in poorly paid jobs.

Posted by Eye2theLongRun at 5:00 PM No comments: