Cause and Effect Issues…….

Paddy tells Mick
He's thinking of buying a Labrador
Fook off says Mick
Have you seen how many of their owners go blind?

Posted by Eye2theLongRun at 10:32 PM No comments:

Tough to take but absolutely correct….

Open Letter to the Head of Boeing

in BUSINESS AS USUAL, MYTHS AND FALLACIES, SEEN AND UNSEEN, WORK

If you honestly believe that using lots of labor to produce a product is a benefit bestowed on society by that product, why do you brag about your tanker’s lower cost?  After all, producing the NewGen at the lowest possible cost – that is, efficiently – means that you don’t employ as many workers as you would if you produced the NewGen inefficiently.

Suppose, for example, that you banned computers from Boeing’s offices and factories.  This policy would oblige you to hire many more workers to perform nearly all tasks from aircraft design to managing the weekly payroll.  You could then boast of even more American jobs being created by the NewGen tanker.  But would this result be something to celebrate?

Or ask the following question: if a brilliant inventor devised a means of producing each of these planes at a cost of $50, and using a mere one hour of modestly skilled labor, would that invention be good or bad for the economy?

Posted by Eye2theLongRun at 12:15 AM No comments:

“The country's current account deficit has fallen to its lowest in more than 20 years, mainly because of higher commodity prices and a drop in investment income.

The deficit - a measure of payments to foreigners minus earnings paid from overseas to New Zealanders - was $4.46 billion for the year to March, or 2.4% percent of gross domestic product (GDP).

That's better than the market was expecting: the consensus among economists had been that the deficit would come down to just over $5 billion.

Statistics New Zealand says the lower deficit - $5.3 billion less than in the previous quarter - is attributable to a slump in imports and a drop in the profits paid to overseas owners of local companies.

Earnings from sales overseas also picked up in the March quarter: for the first time in more than a year, returns from exports rose, largely because of higher commodity prices.”  23 June 2010

Posted by Eye2theLongRun at 3:38 PM No comments:

“One of the few benefits of growing old can be that, while one’s short-term memory may be pathetic, one retains a functioning and commodious long-term memory. This can provide context and a sense of proportion. It can do something to rescue one from what has been well termed the ‘parochialism of the present’ — the tendency to believe that what is happening now, and to us, must be of unprecedented and transcendent significance.”

Posted by Eye2theLongRun at 11:37 AM No comments:

Well…. what a surprise. Tell banks to tighten up and poor credit becomes visible

WASHINGTON (AP) -- The Obama administration's flagship effort to help people in danger of losing their homes is falling flat.

More than a third of the 1.24 million borrowers who have enrolled in the $75 billion mortgage modification program have dropped out. That exceeds the number of people who have managed to have their loan payments reduced to help them keep their homes.

About 340,000 homeowners have received permanent loan modifications and are making payments on time.

Administration officials say the housing market is significantly better than when President Barack Obama entered office. They say those who were rejected from the program will get help in other ways.

But analysts expect the majority will still wind up in foreclosure and that could slow the broader economic recovery.

A major reason so many have fallen out of the program is the Obama administration initially pressured banks to sign up borrowers without insisting first on proof of their income. When banks later moved to collect the information, many troubled homeowners were disqualified or dropped out.

Many borrowers complained that the banks lost their documents. The industry said borrowers weren't sending back the necessary paperwork.

Carlos Woods, a 48-year-old power plant worker in Queens, N.Y., made nine payments during a trial phase but was kicked out of the program after Bank of America said he missed a $1,600 payment afterward. His lawyer said they can prove he made the payment.

Such mistakes happen "more frequently than not, unfortunately," said his lawyer, Sumani Lanka. "I think a lot of it is incompetence."

A spokesman for Bank of America declined to comment on Woods's case.

Treasury officials now require banks to collect two recent pay stubs at the start of the process. Borrowers have to give the Internal Revenue Service permission to provide their most recent tax returns to lenders.

Requiring homeowners to provide documentation of income has turned people away from enrolling in the program. Around 30,000 homeowners started the program in May. That's a sharp turnaround from last summer when more than 100,000 borrowers signed up each month.

As more people leave the program, a new wave of foreclosures could occur. If that happens, it could weaken the housing market and hold back the broader economic recovery.

Even after their loans are modified, many borrowers are simply stuck with too much debt -- from car loans to home equity loans to credit cards.

"The majority of these modifications aren't going to be successful," said Wayne Yamano, vice president of John Burns Real Estate Consulting, a research firm in Irvine, Calif. "Even after the permanent modification, you're still looking at a very high debt burden."

So far nearly 6,400 borrowers have dropped out after the loan modification was made permanent. Most of those borrowers likely defaulted on their modified loans, but a handful either refinanced or sold their homes.

Credit ratings agency Fitch Ratings projects that about two-thirds of borrowers with permanent modifications under the Obama plan will default again within a year after getting their loans modified.

Obama administration officials contend that borrowers are still getting help -- even if they fail to qualify. The administration published statistics showing that nearly half of borrowers who fell out of the program as of April received an alternative loan modification from their lender. About 7 percent fell into foreclosure.

Another option is a short sale -- one in which banks agree to let borrowers sell their homes for less than they owe on their mortgage.

A short sale results in a less severe hit to a borrower's credit score, and is better for communities because homes are less likely to be vandalized or fall into disrepair. To encourage more of those sales, the Obama administration is giving $3,000 for moving expenses to homeowners who complete such a sale or agree to turn over the deed of the property to the lender.

Administration officials said their work on several fronts has helped stabilize the housing market. Besides the foreclosure-prevention plan, they cited government efforts to provide money for home loans, push down mortgage rates and provide a federal tax credit for buyers.

The mortgage modification plan was announced with great fanfare a month after Obama took office.

Consumer advocates had high hopes for Obama's program when it began. But they have since grown disenchanted.

"The foreclosure-prevention program has had minimal impact," said John Taylor, chief executive of the National Community Reinvestment Coalition, a consumer group. "It's sad that they didn't put the same amount of resources into helping families avoid foreclosure as they did helping banks."

Posted by Eye2theLongRun at 12:17 PM No comments:

Survival chances should be nil for CE… dim for company

1. A first lesson in management is that one can delegate authority but one cannot delegate responsibility. Before the Congress Committee the CE of BP in reply to a question stated that he knew nothing of the decisions taken in respect of the relevant undersea drilling risk – and thus was not to blame. He then put this particular fire out with gasoline by stating that BP had hundreds of drilling operations at work at any one time.

2. BP were amongst the “early adopters” of racy, fashionable, “stakeholder based” CSR mantras – going so far as to change BP from meaning British Petroleum to Beyond Petroleum. The less faddish and much criticised advice from Friedman to the present has always been - companies have no comparative advantage as quasi social and environmental welfare agencies they should concentrate exclusively on what they do know something about. In this case oil drilling and its risks.

Posted by Eye2theLongRun at 11:44 AM No comments: 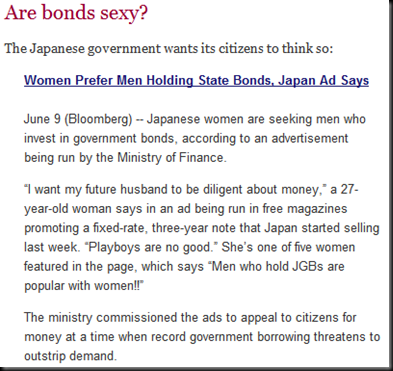 Posted by Eye2theLongRun at 12:40 PM No comments:

Sharp explanation of why time and holding period is such a critical variable in investment.

From Eugene Fama and Kenneth French

What does all this say? The expected equity premium is compensation for bearing the high risk of equities. The risk manifests itself in highly volatile returns. This volatility means that even for long holding periods, there is some probability that less risky investments like bills beat stocks. The probability is lower for longer holding periods, but it never goes to zero.”

Posted by Eye2theLongRun at 11:36 PM No comments:

Keep it real? Get some private property rights

There is a difficult irony in Russell Norman’s demands that more be done to preserve the environment by, say, having users pay for using water – and yet central Green ideology seems to prevent utterly the formation of the very property rights to abstract and discharge which would allow this to happen.

A genuine desire to “keep it real” – as opposed to a vague push to differentiate a bunch of political aspirations – would see the Green Party pushing hard for the formation of private property rights in water and other elements of the environment which they want to see responsibility taken for.

Posted by Eye2theLongRun at 8:05 PM No comments:

The woeful state of reporting and repeaters

Don Boudreaux at his best again……

Here’s a letter to the New York Times:

Suppose Uncle Sam orders you to raise by 41 percent the price you charge for subscriptions to your newspaper.  Would you be surprised to find a subsequent fall in the number of subscribers?  If you assigned a reporter to investigate the reasons for this decline in subscriptions, would you be impressed if that reporter files a story offering several possible explanations for the fall in subscriptions without, however, once mentioning the mandated 41 percent price hike?

Unless you answered “yes” to this last question, I wonder why you published Mickey Meece’s report on today’s record high teenage unemployment rate (“Job Outlook for Teenagers Worsens,” June 1).  Between 2007 and 2009, Uncle Sam ordered teenage workers (who are mostly unskilled) to raise the price they charge for their labor services by 41 percent.  (That is, the federal minimum-wage rose from $5.15 per hour in 2007 to its current level of $7.25 in 2009 – a 41 percent increase.)

Does it not strike you as more than passing strange for your reporter – assigned to help explain why teenagers today have an increasingly difficult time finding jobs – to ignore the fact that these teenagers are ordered by government to raise significantly the wages that they charge their employers?

Posted by Eye2theLongRun at 10:24 AM No comments: